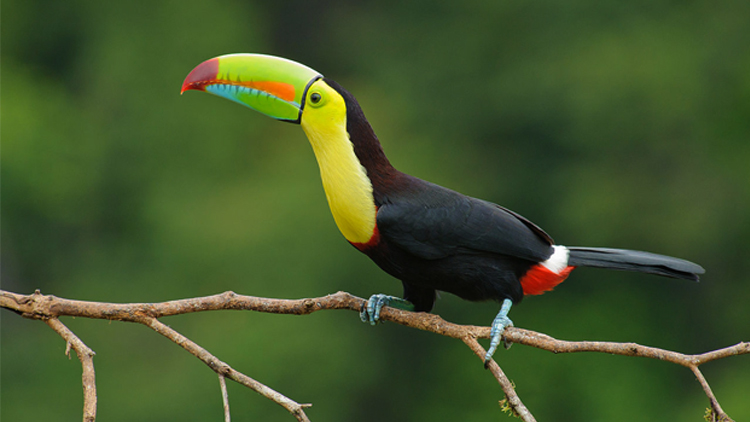 While Costa Rica boasts some of the best bluewater fishing found anywhere in the world and draws serious anglers from far and wide, this little country’s wealth of wildlife also holds infinite allure. A vast array of plants and animals can be found in this tropical paradise, much of it preserved in some 26 well-maintained national parks here.The flora and fauna rich countryside represents a major attraction for tourists, botanists, biologists, and camera buffs alike. One of the most popular of Costa Rica’s numerous national parks is Manuel Antonio. Just south of Quepos on the Pacific Coast, this park is home to over 100 species of mammals, almost 200 species of birds, and a diverse treasure trove of reptiles, amphibians, and insects.

During our whirlwind visit to Costa Rica last month, my wife Patti and I arranged a guided tour of Manuel Antonio between fishing forays. The sights and sounds of the park we encountered typified any visit here. We met Roy, our designated Costa Rican guide, at the park, and almost immediately, found him pointing out a troop of white-headed Capuchin monkeys capering in the treetops. Armed with a tripod-mounted spotting scope, Roy led us down the well-used park road. Wielding the scope with breathtaking expertise and accuracy, he zeroed in on an iguana climbing high on a tree trunk and invited us to take a look at the lizard’s magnified image.

I carried a pair of good  binoculars while Patti snapped photographs through a telephoto lens. Roy also encouraged us to take photographs with our cameras through his spotting scope. Not far down the road, a small tropical subspecies of whitetail deer fed on the lush vegetation nearby. Interestingly, the image of a whitetail buck is featured on the Costa Rican equivalent of our dollar bill.

When a deep-throated chorus from high above us drew our attention, we looked up to discover a number of black forms scrambling through the treetops. “A family of mantled howler monkeys,” Roy said. Like the other guides escorting their respective groups, Roy carried a library of wildlife field-guides in his pants’ pocket to aid in creature identification, but he knew the wild residents here like the back of his hand and answered every question we posed with impressive expertise.

I asked him about predators, and he reported that while there are ocelot and jaguarundi that patrol Manuel Antonio in search of prey, the park lacks larger feline predators like pumas and jaguars although these “big cats” could be found elsewhere in the country.

Manuel Antonio hugs the coastline, so it draws quite a crowd on weekends, much of it locals who enjoy picnicking on the park’s white-sand beaches and swimming in the tepid waters of the Pacific. Since our visit occurs on Saturday morning, our guide’s informative narrative is occasionally interrupted by a steady pilgrimage of beachgoers dragging coolers and baby strollers along the gravel road. The activity creates a noisy ruckus, but the sporadic tumult fails to disturb the critters that live here – apparently they’re used to it.

Roy has been guiding for ten years and he knows his stuff. He effortlessly points out a three-toed sloth perched in a bamboo grove and three more – including a mother and baby hanging high above the public restrooms. Roy notes that sloths, unlike monkeys, are solitary creatures, and that the three toed variety are active during the day while their two-toed brethren are nocturnal. In the course of our four-hour tour and with the indispensable help of Roy and his trusty spotting scope, we observe a number of other native mammals including a pair of greater white-lined bats, a tiny tent bat tucked under a palm frond, an agouti, a two-toed sloth resting high in a treetop along the beach, and more mantled howler monkeys and white-headed Capuchin monkeys, two species of four that are native to Costa Rica. The other two are the Central American squirrel monkey and Geoffroy’s spider monkey.

While Costa Rica also boasts a spectacular spectrum of bird-life, particularly hummingbirds, reclusive rain-forest species can be difficult to see and identify. Our avian sightings that day included a yellow-crowned night heron, a pale vent pigeon, a fiery-billed aracari (also known as a Costa-Rican toucan), and brown pelicans on the beach. At one point Roy trained his spotting scope on a bird sitting on her nest and revealed a common pauraque. Pauraques are ground nesting birds that are similar to nighthawks or whippoorwills. The bird’s camouflage was amazing, making it difficult to see even when its image filled Roy’s scope.

The bulk of the park’s reptilian population seemed to consist primarily of both green and black iguanas lazily climbing up tree trunks or scampering along the beaches. Common basilisk lizards also live here. Basilisks are often called the “Jesus Christ lizard” or “Lagarto de Jesus Cristo” in Costa Rico, so named because of its penchant for running atop bodies of water. We spotted one near the swimming pool of our hotel, but rather than demonstrating his water-treading talents, he decided instead to dash up a coconut tree.

Manuel Antonio Park guides do not ignore the insect life that abounds here. Roy pointed out a number of termite and wasp nests and a golden orb spider, but the most impressive by far was the huge blue butterfly that came loping along the trail like something from a Disney animated movie. Roy suggested that the butterfly’s lumbering erratic flight might be caused by fermented passion fruit nectar, a favorite food. In other words, we may have just been buzzed by a drunken bug.

Back at our hotel, the Falls at Manuel Antonio, a few other guests expressed disappointment with their park visit. They hadn’t seen a fraction of the species we had, but they had gone through the park on their own and without taking advantage of a guided tour. Big mistake.